This year’s annual meeting was very special as we celebrated the 75th Anniversary of York Electric Cooperative on Saturday, May 14. We had a record number of members register, 3,308 to be exact, and if you were among the estimated 10,000 folks in attendance, thank you for making it the great occasion that it was.

Members are always our guests of honor, but we were also pleased to welcome local dignitaries, including Congressman Mick Mulvaney, who led us in the Pledge of Allegiance, state Senator Wes Hayes (District 15), who read a resolution approved by the General Assembly which commended your cooperative on reaching its milestone. State Representatives Raye Felder (District 26) who introduced the resolution to the General Assembly and Tommy Pope (District 47), who was featured in our 75th Anniversary video, also took part in the festivities. You can already see why I came away from the meeting with the best feeling!

There were so many wonderful moments. Here are just a few:

There have been many changes since the creation of YEC in 1941, but one thing that has not changed is our commitment to serve in the best interests of our membership and our community. Once again, thank you for your continued trust and confidence in us. By maintaining our commitment to integrity, accountability, innovation and community commitment, YEC is positioned well to serve you in the years to come.

We are always looking out for you!

As part of York Electric Cooperative’s 75th anniversary celebration, the co-op on Feb. 25, 2016 honored 75 people who have big hearts and embody the spirit of the cooperative program—people who have been High Voltage Heroes to individuals and our community. Each recipient received a cash prize. 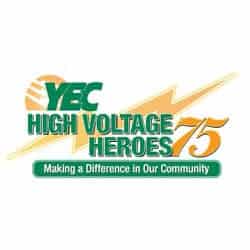 York Electric Cooperative, Inc. is observing its 75th birthday this year and as part of its celebration honored 75 people who have big hearts and embody the spirit of the cooperative program – people who have been High Voltage Heroes to individuals and our community. On February 25, YEC announced and honored the recipients of this community initiative and awarded each of them a cash prize.

“One of YEC’s core values is commitment to community and our High Voltage Heroes initiative is an appropriate way to say thank you for the selfless giving of these special community members,” says Paul Basha, YEC’s President and CEO. “York Electric has been an important part of our local community for 75 years and we are very excited to include these recognitions as part of our 75th-anniversary celebration.”

Thank you for helping your cooperative’s High Voltage Heroes’ initiative become a reality. We have received many wonderful stories and heartwarming accounts of people helping people, causes and responding to the needs put before them. We appreciate those of you who submitted nominations!

Due to the quality of the nominations, it has been a difficult task for the selection committee to narrow the field. YEC will notify the winners in the first quarter of 2016 and plan to publish the announcement in April’s South Carolina Living magazine. Each of the 75 High Voltage Heroes winners will be recognized and awarded with a cash prize. This is an appropriate way to say thank you for the selfless giving of these special community members.

York Electric has been an important part of our local community for 75 years, and we are very excited to include these recognitions as part of our 75th-anniversary celebration.