It’s definitely worth your while! 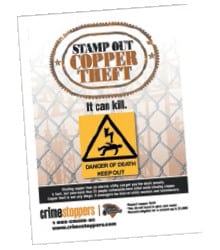 If you missed our October 2012 cover story in South Carolina Living magazine, allow us to highlight again our public awareness campaign to combat copper theft in local communities: York Electric and other S.C. co-ops have partnered with Crime Stoppers of South Carolina, a non-profit organization that offers cash rewards for tips that solve active crimes. We’re out to alert people to the costs and dangers associated with copper theft.

The possibility of earning a reward isn’t the only way you can benefit: Copper theft losses and repair costs are ultimately borne by co-op members—and they run into the thousands. Collectively, S.C. electric co-ops have spent more than $1 million on copper theft-related incidents since the start of 2011. According to a 2010 study by the U.S. Department of Energy, copper theft costs American utilities $300 million a year.

The crime also endangers co-op lineworkers and members as well as their property. If a copper thief takes the ground wire at the meter, there’s less protection for the home against surges that lightning strikes can cause. For the co-ops, copper theft at substations or other facilities seriously jeopardizes our operations and endangers our employees.

It’s hard to muster much sympathy for thieves—or would-be thieves, since there have been many incidents of people being electrocuted while attempting to steal copper. If you think you may know someone who is tempted to try it, do him or her a favor and call 1-888-CRIMESC (274-6372). You might save a life, including that of the innocent people who copper theft endangers.

Anyone who has any information about copper thieves can call Crime Stoppers and give us a chance to put these criminals where they belong. By doing your part, you’ll help hold down the cost of your electric service while helping us keep it reliable and safe.