You are here: Home / Events / Members to decide on single member district voting

Important Update:
The York Electric Cooperative Board of Directors voted to suspend the 79th Annual Meeting because of the coronavirus pandemic. Voting on the proposed bylaw changes and single-member district voting will take place at a later date. 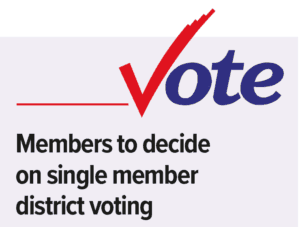 York Electric Cooperative is divided into nine (9) districts, and each district is represented by one Trustee on the board. This structure ensures that our entire service territory is represented. Currently, you can vote in every district election, regardless of where you live. However, if the Cooperative adopts single-member voting districts, you would only be allowed to vote for a board candidate who lives in the district where you live. That election would occur every third year.

Would you like to continue to be able to vote every year for every seat on the Board up for election?

____ YES: “I want the opportunity to keep voting for every seat on the Board every year.”

____ NO: “I only want the authority to vote for candidates in my own district every third year.”

York Electric Cooperative encourages members to review the proposed bylaw changes that will be voted on at the Annual Meeting of Members. The full document showing these material changes, along with some additional typographical corrections, is available for download here.